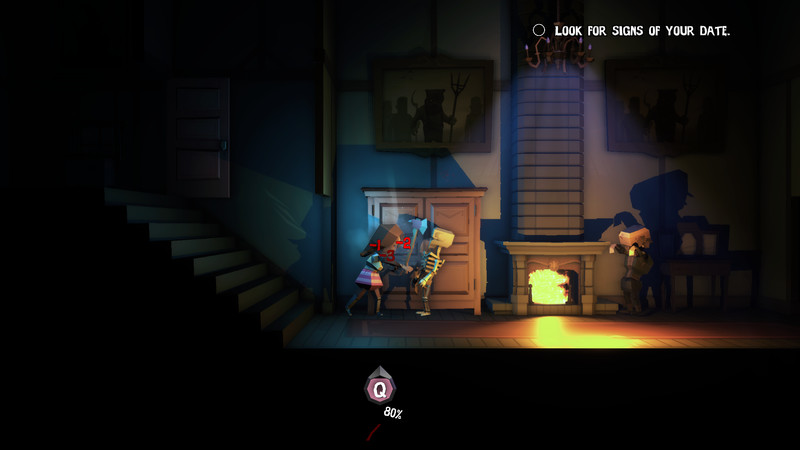 Phantom Halls is a squad-based side-scrolling comedy-horror game. A group of teens from the Occult Studies Club set out on an assignment, but quickly find themselves attempting to survive a night in a haunted mansion...

Prepare to face the undead terrors that stalk the phantom halls! Squad up to escape alive using whatever you can find, but remember - you can’t kill what you can't see, so be sure to bring a flashlight! 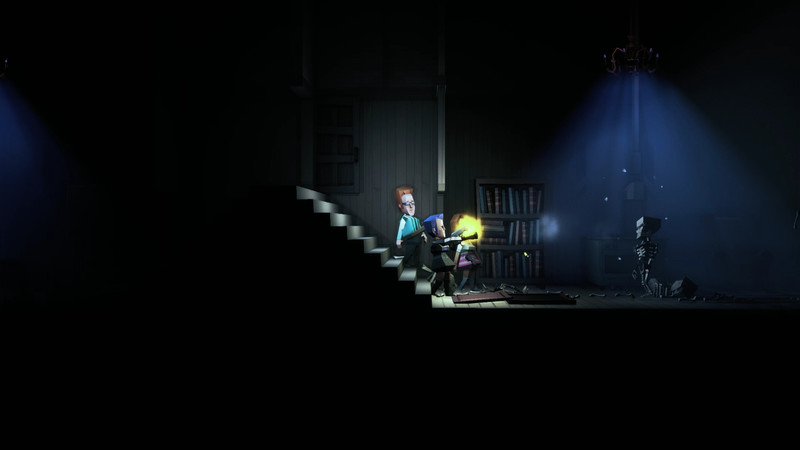 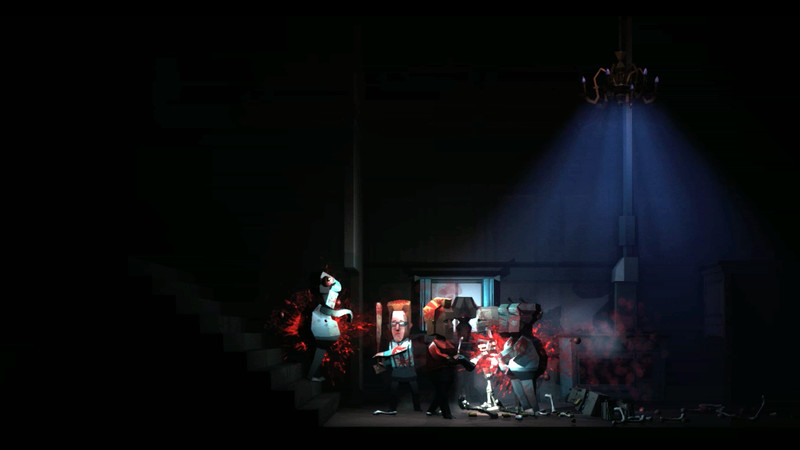 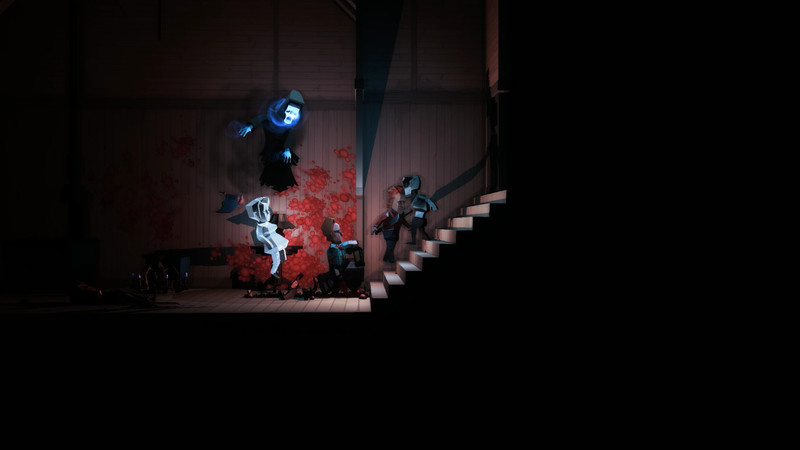 Just wanted to post this while the game is on sale still and just got an Evil dead update. This is a pretty cool and fun gme that is a time killing roguelite where you choose a character and try to make it through a level alive avoiding traps and finding survivors. You can contorl the survivors together with your maina group, and switch control for lead between them. It could be alittle confusing at first but only for a moment, till you get the gist of it, like attacking effectively between lead and followers. The items are random, same with traps enemies and room layout. I've used the contorller, dunno how the mouse and kb hold up, but it's pretty smooth with the controller. There is an ultrawide setting, but it cropped out the top/bottom portions of the UI which made it tough assigning items so I had to switch back to 16:9. It's in EA though so to be expected. While it's 5 dollars it's definitely a steal. Still worth it at 10 too imo.. Just completed my first playthrough on the first try. This game is extremely fun, and has a lot of potential. Basically, so far, you are given a mission that you have to complete by going through the mansion, picking up machine guns, rifles, shotguns, flare guns, and an assortment of other ranged and melee weapons. An interesting but hard to control mechanic is that you can 'rescue' two people in the house that will aid in your battle. The problem with this is that they follow close behind you but you cannot control their movement. This makes giving them a melee weapon basically useless,they will take damage because they wont be able to move away. This means that you will end up giving them the guns and you having to slowly melee your way through the mansion, not that thats a big inconvenience. The monsters are classic: skeletons, bats, and zombies. Although they are basic they can be a pain to put down, especially with melee weapons. I would like to see scarier monsters in future update, and maybe some more movie tie-ins. Overall a fun that reminds me of old school slow paced survival horror like alone in the dark.. Neat looking game, with a quirky graphics style. Reminded me slightly of a more modern day Darkest Dungeon, except this isn't turn based - it's real time, which works pretty well.

I started offAsh (who wouldn't?) and fought my way past several undead with my trusty boomstick, before it ran out of ammo. Uh oh. Well, I'd found a fire axe and a crowbar, so I could melee further undead - this requires decent timing to move forwards, strike (hope you proc a knockback) and withdraw until you're ready to swing again.

Pretty quickly though I found a pistol, rifle and SMG, along with just enough ammo to keep me going.

Also, I rescued two other people, who travel with me on my quest to kill Evil Ash.

This gets pretty neat, because now you can equip all 3 characters and activate their weapons using the keys Q, W or E.

Quest successful, it's then a case of fighting a way back out of the haunted house (new monsters spawn) and done!

Yup, finished it first go, without too much difficulty.

I may have been very lucky? Dunno.

Not sure on the longevity of the game though, but it's early access, so I'm hoping they'll keep adding to it.

Would be nice if there was some sort of cut scene / ending appropriate to the character when you complete - would add incentive to complete with the variety of different characters. :)

Overall, thumbs up - took me bang on 30 mins to play through.. (This Review has been updated for the V1.0 release of the game)

A fun sidescrolling action game with a cool spooky atmosphere.

Pros: Great visuals and artstyle.
Killing things in this game is satisfyinghell. Bash their brains in and shoot em all up.
The missions are pretty damn fun and diverse.
Each character is unique with their own skilltree, special abilities and spawn weapon.
Has a large variety of areas, weapons and enemies.
All sorts of upgrades can be obtained in your HQ to gain certain advantages or
cosmetic changes in game.


Cons: Not too much of a con for me to be honest, but it's worth metioning. For some people the gameplay in this game can seem repetitive. You search things, kill things, explore, do your objective, finish your mission, then leave the mansion. It can seem repetitive for some users, but I haven't found much of a problem with the gameplay. I'm still having justmuch funI did back in the early access version of the game.

Overall, I give it 9 skeletons out of 10. I can see this game being a cult classic in the future. I really think you should buy it. It's worth the 20 bucks.. Nearly 5 hours of play, having a blast. Looking forward to future fixes and content updates. Some levels seem painfully under-resourced for items and weapons, but this is rare. Definitely recommend giving it a go, it's a charming little romp for any fan of haunted houses and horror. And, of course, now there's Ash and the Cabin!. Sadly, not worth it currently. It's 9 hours grind with no proper ending or even acknowledgement. I enjoyed the Evil Dead content, but everything else feels pretty lackluster. Turkey Shoot update took me 3 minutes to complete.. love this so much imlike being ash but its hard to move 3 guys at once co-op would be nice besides that i love it. Update: The additional updates have been exactly what the game needs. More challenge and traps from each room making the journey through the mansion much more tense. I'd say the controls are a bit awkward (moving with A and D while attacking with Q W E) and the back tracking through empty spaces kills a bit of the fun, but I can safely say it's enjoyableit is and headed in the right direction!


I hope they plan on doing some major updates because right now it's incredibly slow paced, extremely dull with many empty areas, and finally it's extremely easy for a rogue-like game.

The hardest part is convincing yourself it's worth slowly walking through rooms to complete mundane objectives while finding locked doors forcing you to slowly walk back through all the rooms you went through that are now empty if there were any enemies in them to begin with. They also overload you with equipment so nothing ever feels like a threat... the only time I ever really take damage is from falling chandeliers.

Basically, it's boring and there's a major lack of action... the complete opposite of Evil Dead.